LinkedIn founder Reid Hoffman has spoken about the immense value he places on reference checking, stating that it is his number one choice, over interviews, at getting to the truth about a candidate. Indeed, reference checking still remains one of the most-used hiring methods and one favored by many executives and hiring managers.

“If you told me ‘Pick one — you could either get references or an interview,’ I would pick references every day of the week.” --Reid Hoffman, founder, LinkedIn

Yet there are still a fair number of HR managers who regard reference checking as a waste of time, claiming that candidates will only provide contacts who are guaranteed to say good things about them or are afraid to say anything because of legal issues. What causes these discrepancies in how people view reference checks? And how helpful are reference checks really?

Are You Checking Enough References, Correctly?

First, we have to consider how references are conducted by your organization. Are they being checked by phone? Traditional methods of calling for information can lead to disjointed, limited feedback. References are often leery of providing details over the phone, are asked the wrong questions (for example, ones that require only a “yes”, “no” answer) or are just too busy to give much information of use.

Second, how consistent and organized are your reference checks? Many HR managers see it only as a task to rush through for compliance, with little regard for getting real answers about a candidate. In fact, recruiters tend to check only 2.4 references on average to fulfill this “requirement”.

How Many References Should You Check?

But according to a new Checkster research study, this isn’t enough. Checkster evaluated 51,000 references to determine the magic number of references needed for quality hires, to prevent turnover and ensure that candidates aren’t cherry-picking the few references who will say good things about them. How many should you check? Four.

One might be the loneliest number but four is the magic number
when it comes to reference checking new hires.

So it makes sense that if your organization is only checking 2 references on average, you’re not getting to the truth about a candidate. In fact, data analysis of the total number of references who provided feedback on the candidates in the study was correlated with first year turnover. Candidates who had three or fewer references providing feedback showed significantly higher rates of turnover and no shows on their first day of employment. The biggest difference between obtaining two and four references was an increase in involuntary turnover and no show by as much as 80%.

Involuntary turnover increases by as much as 80% when you
hire based on only two reference checks, as compared to four.

"Uh... But I Don't Have Time to Check More References"

Your team is already overwhelmed with tasks. How on earth are you going to double the number of references checked? Easy. Digital automation tools allow hiring managers to access many more references than would be feasible with phone calls. In fact, time spent for HR managers conducting references drops from over an hour to just 2 minutes per candidate.

And because of the confidentiality of the digital process, references feel more comfortable giving candid feedback about candidates. Even better, tools like Checkster’s Reference Insights bring easy to read reports and full consistency into the process making the reference feedback relevant and useful. Better feedback leads to better hiring decisions.

Get the full report here to understand exactly how the number of references you check are directly correlated with high turnover and job no shows. It turns out some things do come easy -- checking four references is an easy way to increase your quality of hire. And you can make it happen easily using Checkster. 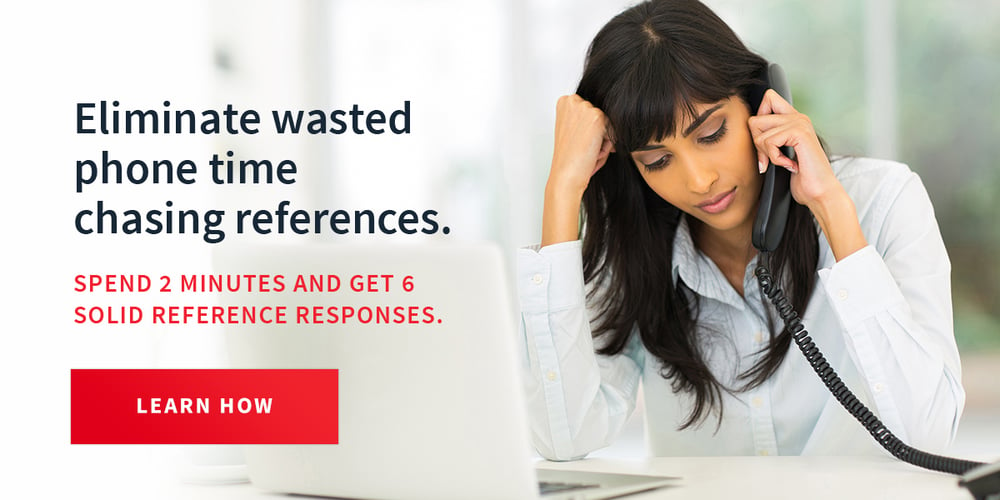