The Art of Hiring a Diverse Team

The Art of Hiring a Diverse Team

Most of us agree that diversity is a very good thing. Whether we’re talking about a stock portfolio, a sports team, movies, or the types of meals we enjoy, diversity makes for a more interesting, smart and stimulating world.

The same sentiment stands with diversity in the workplace.  Malcolm Forbes, the editor of Forbes magazine, once described diversity as “the art of thinking independently together.” In this article I will cover the diversity macro trend, the value of diversity on decision making and finally what you can do practically to impact diversity in people related decisions.

There is a major trend happening right now. Our demographics are changing around the United States. We are becoming more diverse overall and by 2065, it is projected that whites will comprise less than 46% of the population: 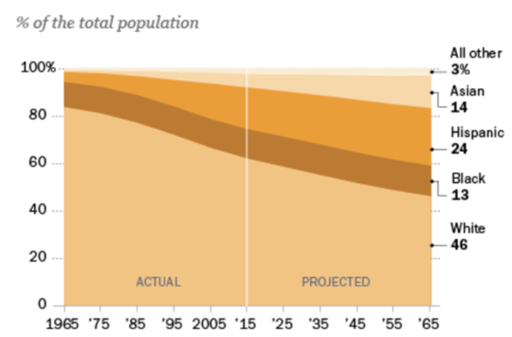 For companies across the U.S., this represents an important opportunity. Diverse teams produce better overall decisions (see more below). Each individual lends his or her differing level of experience, providing distinct viewpoints and communication styles, thereby offering more creative solutions to vexing problems and a competitive edge for enterprises.

That sounds great, you say.  Companies should be hiring diverse candidates across all genres of business to immediately catapult them to higher levels of success!  But there is a problem...

Diversity in the Workplace and Interviews

White candidates are getting more interviews. In fact, according to this Talent Works chart below, non-whites are booking 2.3 times fewer interviews than their Caucasian counterparts. But why? The reality is, personal bias still exists in one form or another, perhaps subconsciously. And it seems as though various anti-bias trainings don’t always help to curb or overcome this behavior. 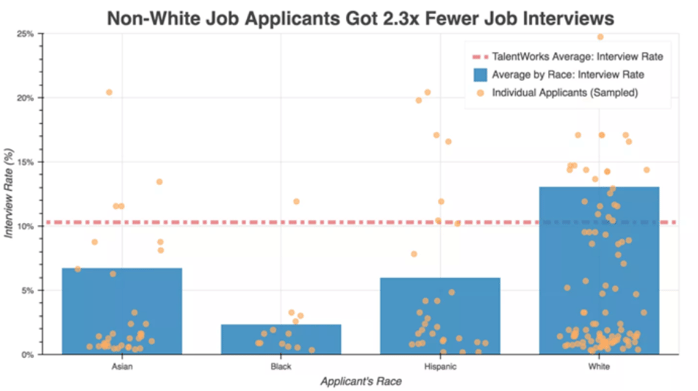 Companies across the country are struggling to create diverse workplaces. Because there are still biases to overcome and perhaps other intangible obstacles, companies have tried various methods to eliminate bias during the hiring process.

Some ideas might include blocking the names of candidates in order to create ethnic anonymity, or attempting to provide a more diverse hiring review panel.

In addition, many companies have tried target recruiting from ethnically diverse websites and universities, but those results can be mixed, depending on the rate of response and other factors. Other methods include listening to a more diverse and varied group of voices from hiring panels to aid hiring choices, but this approach isn’t typically tracked sufficiently or utilized to its full effect.

Hiring the right candidate can be tricky. And it’s clear that the methodology for doing so needs to evolve. I remember being on a hiring panel at a previous company, and an upper management colleague of mine was helping to conduct interviews (along with the hiring manager). After the candidates left, my colleague leaned over to me and announced that candidate “A” was the obvious choice and listed his evidence for his preference.  I was fairly neutral on the decision, seeing both pros and cons to both candidates.

After the hiring manager came back into the room, she announced that she considered candidate “B” clearly the winner and asserted why she thought he was the stronger candidate. My colleague sat in silence, not sharing his opinion. Through a communication breakdown with the hiring manager and due to social influence, candidate “B” prevailed. Had my colleague felt more comfortable sharing his thoughts in the room that day, perhaps candidate “A” would have received an offer. Was candidate “B” truly the best fit for the job or would that decision ultimately cost the company in time and resources?

How could the above situation be improved?

There are better ways to optimize the hiring process and hire ideal candidates without bias. Most approaches are made to improve the sourcing aspect, but increasing sourcing, while commendable, will never solve final decision.  So during an interview debrief there is an easy way to make sure all voices are heard: the low tech “Post It” approach. Whereby you write down information about all the candidates, their qualities and drawbacks and which one you think is the best and why, then a moderator would review them and lead a discussion about it.

This method has some merit and eliminates some of the social influence pressure, but it also seems somewhat clunky and not very streamlined. Some companies like Google use hiring committees instead of hiring managers to make important decisions about hiring, which could be very effective, albeit time-consuming. Whatever method you choose to optimize the hiring process, the feedback collected should be thorough, independent, and diverse.

Here is why Checkster has created our interview collective intelligence tool called Interview Insights.  It is used to great effect in providing your hiring manager with candid feedback from all interviewers involved in the hiring process.

Specifically, Interview Insights helps to reduce bias by removing the potential prejudice of an outspoken interviewer by instead gathering feedback digitally, allowing interviewers to provide thoughtful, personal, attribute specific input about the candidate.

In addition, the tool helps to quantify a candidate’s attributes and qualifications, as well as their weaknesses and challenges, so you can see the whole picture, making it easy to organize, compile, and review meaningful data in record time.

The result? Organizations hire exceptional candidates with diverse talents and backgrounds, shaping successful teams that innovate and work strategically towards their common goals.