How to Compare Global Candidates for Hiring

How to Compare Global Candidates for Hiring

Does your company hold a global presence and acquire, promote, demote talent throughout many different countries? When you subject a diverse world to the same rating scale in a survey, it’s important to be aware of the cultural and social context of each country to understand differences in the results. The adage “apples to apples, oranges to oranges” applies to receiving work performance ratings around the world. Checkster ran a series of surveys, pulling data from 26,297 raters and 5,000 candidates across 8 different countries. Respondents were to provide feedback for a candidate and give a score from 1 to 7 (1 being a low score, 7 being the highest) regarding two separate questions:

Q1.) If you had the opportunity, would you rehire or recommend hiring this person again? (Probability of Rehire)

Q2.) How would you rate the overall quality of this person’s job performance? (Overall Performance)

Some interesting insights were revealed during our analysis: 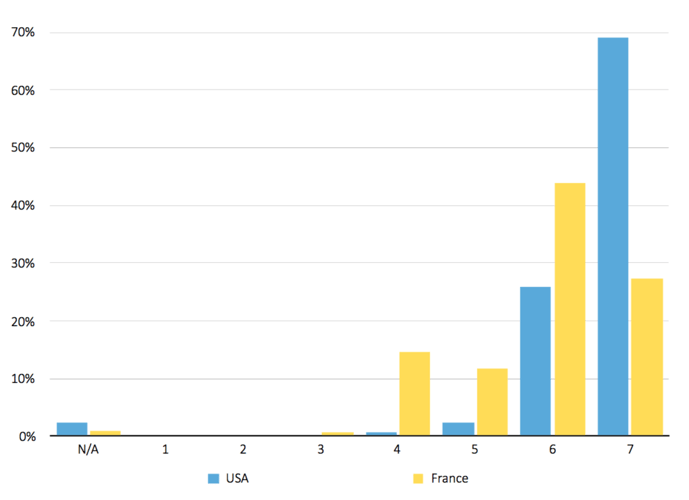 Based on the statistical averages and cumulative distributions of ratings comparing the USA and France, hiring a candidate with a performance of a rating with a 5.90 in France equals a 6.54 in the USA.

Despite being Commonwealth countries, noticeable differences still exist in average ratings of Q1 and Q2 between Canada and Australia according to the chart below.