Can You and Your Workforce Raise Your Game in the Age of Reinvention?

Can You and Your Workforce Raise Your Game in the Age of Reinvention?

“If you live each day as if it was your last, someday you’ll most certainly be right. Stay hungry. Stay foolish.” -- Steve Jobs

We were recently at a wedding dinner in Boston honoring the daughter of a close friend from India. The daughter married a boy in the United States, and we were a few of the fortunate guests invited.

As the dinner was winding down, the younger sister of the bride was ready to call it a night. She exclaimed, “I’m getting Uber! Who wants to go back to the hotel with me?” She then began placing the order on her iPhone. 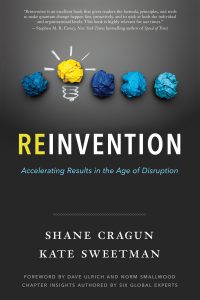 Within seconds she exclaimed excitedly, “A Suburban we can all fit in will be here in 10 minutes.” A few minutes later she nudged someone sitting next to her and asked, “Hey, shall I get a black one?” After getting confirmation that the color black was definitely the coolest of all color choices, she modified her order. And within 10 minutes she and others climbed into a shiny, new black Chevy Suburban. And that was that.

In this Age of Uber, there are now more Uber drivers (10,000) in New York City than yellow-cab drivers. New York City cab drivers are seeing a serious decrease in their business, and are in the process of asking the government to intervene and protect their livelihoods.

But it is not just Uber disrupting the livelihoods of taxi drivers. We live in an Age of Disruption. Virtually everything is being disrupted.

We suggest that the only constant going forward is change. We’re talking massive, disruptive, and tumultuous change. We are now in the bit economy. And it is beginning to look like radical change will be the absolute going forward in the 21st century.

With just a quick glance through the news, it becomes apparent that disruption is everywhere.

MIT’s Media Lab announced that it has created a 4-D television that allows viewers to reach through the screen and touch the objects they are viewing. This might seem more like a gimmick than a game changer. But check this out.

Having cut our teeth in Silicon Valley, we suggest that a version of Moore’s Law will soon apply to the speed of change in the global business environment.

Gordon Moore was one of the original Intel co-founders. In 1965 he predicted that the number of transistors per square inch on integrated circuits (microchips) would double every year going forward. And he has been right. We suggest that the speed of change in the global business environment will eventually reach a point where it is doubling every year.

This book was written to help you and your organization increase your ability to facilitate major change when the need arises. And, we suggest, make that radical pivot even before seismic change interrupts your world.

Based upon years of study and experience on the subject of individual and organizational high performance, we predict that the ability to Reinvent Yourself and Reinvent Your Organization will be one of the most important competencies to have in the 21st century. In fact, having this ability may be simply the price of admission to play in today’s global chess game.

And why just maintain results? We believe there is a way to actually Accelerate Results by leveraging incoming global shock waves with the right strategies.

In the 1980s, after global competition was introduced to the United States by the Big Three Japanese car-makers, the buzzword was “Change.”

In the 1990s, the need to change seemed to intensify and the “Change” buzzword was replaced with “Reengineer.” Within four years of the publication of Michael Hammer’s Reengineering the Corporation, approximately 70 percent of all Fortune 500 companies admitted they had re-engineered business processes. In the 2000s, urgency for improved business results seemed to greatly intensify, and the buzzword became “Transformation.”

We suggest that today, and for the foreseeable future, the new buzzword will be known as “Reinvention ”— where absolutely everything is on the table, and all assumptions are challenged in accelerated and quantum ways.

It’s not enough anymore just to keep up. Or to be what we call a Leader-Caretaker. As professionals, we must constantly position ourselves mentally, emotionally, physically, and socially to boldly lead the pack into the headwinds of change.

Look what happened to Microsoft after 12 years of leadership under CEO Steve Ballmer. Ballmer was the ultimate Leader-Caretaker. He played defense, and avoided offense. He led as if his role was simply to keep the company afloat after Bill left.

Ballmer fought hard to maintain the status quo. He always seemed surprised when the moat around his company began shrinking. He felt that sticking with what made Microsoft successful in the past — core hardware and software—was the recipe for success forever and ever. But the share price spoke otherwise. It dropped under his leadership from $60 in January 2012 to $30 by the time he departed in February 2014.

What will be Ballmer’s biggest legacy? In 2007 his management team pleaded with him to begin investing in cloud computing. Ballmer ignored these recommendations and instead placed all his bets on the doomed Vista operating platform.

On the other hand, there are leaders called Leader-Accelerators. These are the exceptional leaders of the 21st century. Leader-Accelerators think big and make things happen under almost any circumstance. They blow life and energy into people and processes. They have an incredible multiplier effect on results.

Elon Musk qualifies as a Leader-Accelerator. He is the serial entrepreneur behind PayPal, Tesla, SpaceX, and Solar City. He was recently quoted as saying, “I would like to die on Mars. Just not on impact.”

Does leadership thinking get any bigger than that? Caretaking is no longer on option in today’s Age of Disruption!

We define reinvention as:

What the future holds

It’s getting harder for futurists to predict upcoming changes in the global business environment. These strategists can no longer depend upon past trends for predictions. After all, just a decade before the World Wide Web became commonplace in 1996, there was very little buzz about its potential, or even its existence.

Although we may not know for certain what future global disruptions might be, we can be certain that they are already locked and loaded in the pipeline and are being prepared to launch.

Silicon Valley entrepreneurs are now vowing to disrupt entire industries. Hearing this, a Fortune 500 CEO recently commented anonymously that he and his fellow chief executives are now more concerned about the competition coming from the Bay Area than from traditional sources of competition.

And although many of the new ideas, technologies, and disruptions may emanate from Palo Alto and its neighboring cities, the phenomenon of disruption is clearly global